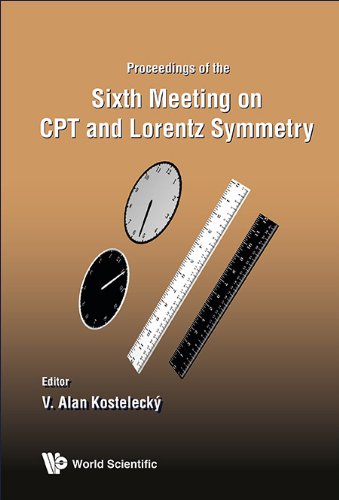 This book contains the Proceedings of the Sixth Meeting on CPT and Lorentz Symmetry, held at Indiana University in Bloomington on June 17 21, 2013. The Meeting focused on tests of these fundamental symmetries and on related theoretical issues, including scenarios for possible violations. Topics covered at the meeting include searches for CPT and Lorentz violations involving: accelerator and collider experiments; atomic, nuclear, and particle decays; birefringence, dispersion, and anisotropy in cosmological sources; clock-comparison measurements; electromagnetic resonant cavities and lasers; tests of the equivalence principle; gauge and Higgs particles; high-energy astrophysical observations; laboratory tests of gravity; matter interferometry; neutrino oscillations and propagation; oscillations and decays of neutral mesons; particle antiparticle comparisons; post-newtonian gravity in the solar system and beyond; second- and third-generation particles; space-based missions; spectroscopy of hydrogen and antihydrogen; spin-polarized matter; and time-of-flight measurements. Theoretical discussions include physical effects at the level of the Standard Model, General Relativity, and beyond; the possible origins and mechanisms for Lorentz and CPT violations; classical and quantum issues in field theory, particle physics, gravity, and string theory; and mathematical foundations including Finsler geometry.