Building the Continental Empire: American Expansion from the Revolution to the Civil War (American Ways Series)

Building the Continental Empire: American Expansion from the Revolution to the Civil War (American Ways Series) 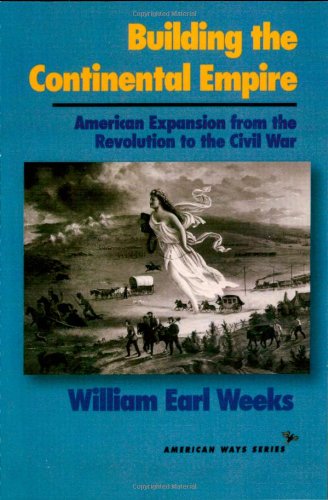 blication Date: September 1, 1997 | ISBN-10: 156663136X | ISBN-13: 978-1566631365
In this fresh survey of foreign relations in the early years of the American republic, William Earl Weeks argues that the construction of the new nation went hand in hand with the building of the American empire. Mr. Weeks traces the origins of this initiative to the 1750s, when the Founding Fathers began to perceive the advantages of colonial union and the possibility of creating an empire within the British Empire that would provide security and the potential for commercial and territorial expansion. After the adoption of the Constitution—and a far stronger central government than had been popularly imagined—the need to expand combined with a messianic American nationalism. The result was aggressive diplomacy by successive presidential administrations. From the acquisition of Louisiana and Florida to the Mexican War, from the Monroe Doctrine to the annexation of Texas, Mr. Weeks describes the ideology and scope of American expansion in what has become known as the age of Manifest Destiny. Relations with Great Britain, France, and Spain; the role of missionaries, technology, and the federal government; and the issue of slavery are key elements in this succinct and thoughtful view of the making of the continental nation.