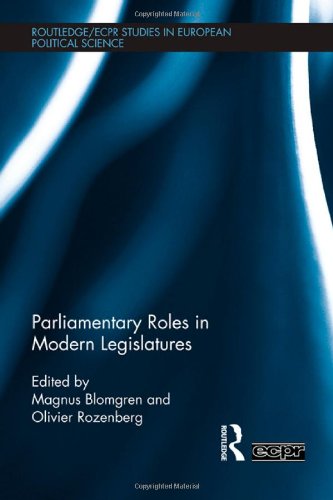 This book gathers the most influential authors on role research and legislative studies to examine the different roles that MPs are playing in modern-day legislatures. It provides a comprehensive and critical overview of current research on legislative roles, summarises previous research, presents a large variety of methodological approaches and also explores the latest developing approaches to role theory.

The concept of political roles has become increasingly relevant for understanding contemporary political systems. Parliamentary, legislative and representative roles are professional roles that provide a way of connecting the individual legislator to their institution that can also explain a legislator’s attitude and behaviour. Drawing upon case studies with as much as 40 years of data that include Germany, the Netherlands, UK, Austria, Hungary, Australia, New Zealand and the European Parliament, this book examines the link between representative roles, different institutional settings and parliamentary behaviour. It argues that the roles MPs play depend of who they think they should represent; between their voters, their party, the people of their country and also themselves, conflicts of loyalty can occur. This book provides a framework to analyse MPs’ choices by searching both the reasons for their views about representation, and the consequences of those views in parliament.

I can't download any part of this book.
Please help me.

@ohid1986 wrote:I can't download any part of this book.
Please help me.