Surface Tension in Microsystems: Engineering Below the Capillary Length

Surface Tension in Microsystems: Engineering Below the Capillary Length 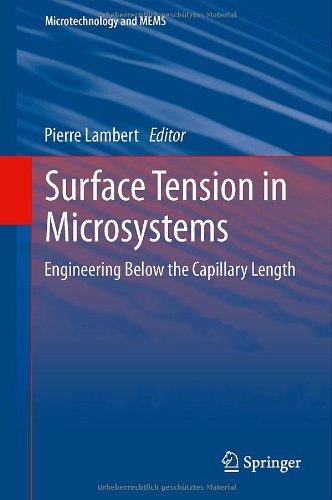 This book describes how surface tension effects can be used by engineers to provide mechanical functions in miniaturized products (<1 mm). Even if precursors of this field such as Jurin or Laplace already date back to the 18th century, describing surface tension effects from a mechanical perspective is very recent.
The originality of this book is to consider the effects of capillary bridges on solids, including forces and torques exerted both statically and dynamically by the liquid along the 6 degrees-of-freedom.
It provides a comprehensive approach to various applications, such as capillary adhesion (axial force), centering force in packaging and micro-assembly (lateral force) and recent developments such as a capillary motor (torque).
It devises how surface tension can be used to provide mechanical functions such as actuation (bubble-actuated compliant table), sealing and tightness, energy harvesting, nanodispending.