The Logician and the Engineer: How George Boole and Claude Shannon Created the Information Age

The Logician and the Engineer: How George Boole and Claude Shannon Created the Information Age 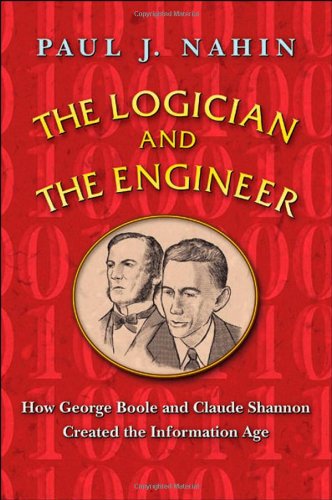 Boolean algebra, also called Boolean logic, is at the heart of the electronic circuitry in everything we use--from our computers and cars, to our kitchen gadgets and home appliances. How did a system of mathematics established in the Victorian era become the basis for such incredible technological achievements a century later? In The Logician and the Engineer, best-selling popular math writer Paul Nahin combines engaging problems and a colorful historical narrative to tell the remarkable story of how two men in different eras--mathematician and philosopher George Boole (1815-1864) and electrical engineer and pioneering information theorist Claude Shannon (1916-2001)--advanced Boolean logic and became founding fathers of the electronic communications age.

Presenting the dual biographies of Boole and Shannon, Nahin examines the history of Boole's innovative ideas, and considers how they led to Shannon's groundbreaking work on electrical relay circuits and information theory. Along the way, Nahin presents logic problems for readers to solve and talks about the contributions of such key players as Georg Cantor, Tibor Rado, and Marvin Minsky--as well as the crucial role of Alan Turing's "Turing machine"--in the development of mathematical logic and data transmission. Nahin takes readers from fundamental concepts to a deeper and more sophisticated understanding of how a modern digital machine such as the computer is constructed. Nahin also delves into the newest ideas in quantum mechanics and thermodynamics in order to explore computing's possible limitations in the twenty-first century and beyond.