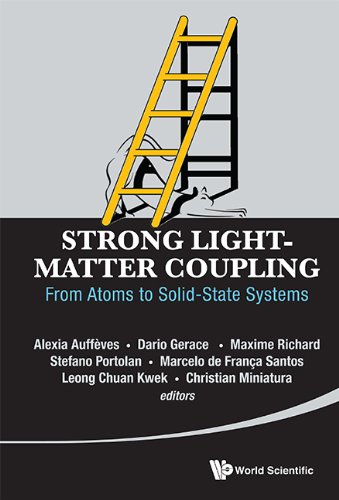 The physics of strong light-matter coupling has been addressed in different scientific communities over the last three decades. Since the early eighties, atoms coupled to optical and microwave cavities have led to pioneering demonstrations of cavity quantum electrodynamics, Gedanken experiments, and building blocks for quantum information processing, for which the Nobel Prize in Physics was awarded in 2012. In the framework of semiconducting devices, strong coupling has allowed investigations into the physics of Bose gases in solid-state environments, and the latter holds promise for exploiting light-matter interaction at the single-photon level in scalable architectures. More recently, impressive developments in the so-called superconducting circuit QED have opened another fundamental playground to revisit cavity quantum electrodynamics for practical and fundamental purposes.

This book aims at developing the necessary interface between these communities, by providing future researchers with a robust conceptual, theoretical and experimental basis on strong light-matter coupling, both in the classical and in the quantum regimes. In addition, the emphasis is on new forefront research topics currently developed around the physics of strong light-matter interaction in the atomic and solid-state scenario.