Join the forum, it's quick and easy
Boxutech
Welcome to Boxutech
Boxutech
Would you like to react to this message? Create an account in a few clicks or log in to continue. 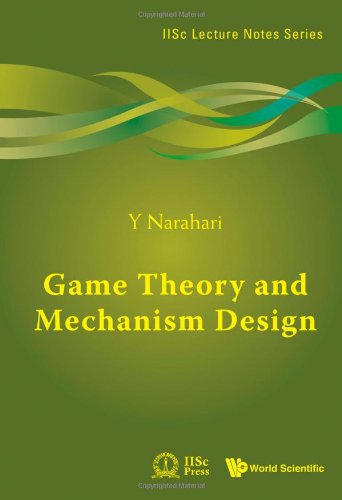 This book offers a self-sufficient treatment of a key tool, game theory and mechanism design, to model, analyze, and solve centralized as well as decentralized design problems involving multiple autonomous agents that interact strategically in a rational and intelligent way. The contents of the book provide a sound foundation of game theory and mechanism design theory which clearly represent the "science" behind traditional as well as emerging economic applications for the society.

The importance of the discipline of game theory has been recognized through numerous Nobel prizes in economic sciences being awarded to game theorists, including the 2005, 2007, and 2012 prizes. The book distills the marvelous contributions of these and other celebrated game theorists and presents it in a way that can be easily understood even by senior undergraduate students.

A unique feature of the book is its detailed coverage of mechanism design which is the art of designing a game among strategic agents so that a social goal is realized in an equilibrium of the induced game. Another feature is a large number of illustrative examples that are representative of both classical and modern applications of game theory and mechanism design. The book also includes informative biographical sketches of game theory legends, and is specially customized to a general engineering audience.

After a thorough reading of this book, readers would be able to apply game theory and mechanism design in a principled and mature way to solve relevant problems in computer science (esp, artificial intelligence/machine learning), computer engineering, operations research, industrial engineering and microeconomics.